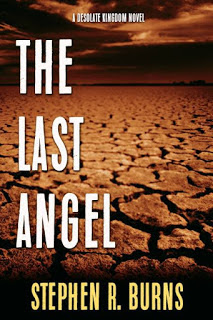 Title : The Last Angel
Series : The Desolate Kingdom Novels
Author : Stephen R. Burns
The Last Angel is Book #1 in Stephen R. Burns new series, The Desolate Kingdom Novels
Blurb
She was the biggest angel Tommy had ever seen. Seven feet tall with wide shoulders and massive wings. It wasn’t until he killed her that he realized she was different. She didn’t have claws. Or fangs. And she was beautiful, the kind of beauty that made you want to grab your rosary and a drink and thank God you were still alive.

It had been a hundred years since the Storms had nearly wiped out humanity and turned the world into a desolate wasteland. Worse, the angels had come with them. Fanged creatures that terrorized what was left of the human race. If you had the guts, if you could stop your hands from shaking, they could be killed. Most people didn’t have the guts. Most people let the ugly get to them.

He’d come back from the city to raise his daughter, but when the creature had swooped down out of the red sun and slaughtered eleven people, including his little girl, everything changed. They’d made him Sheriff because they were scared. Because they knew he could kill them.

But now, he wasn’t sure. The giant angel was dead, courtesy of his sawed off shotgun, the same gun he now pointed at the child standing beside the body. No claws. No fangs. Just like her mother. Just like his daughter.

Tommy paused, then raised his gun.
Add to Goodreads 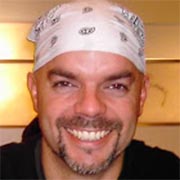 A little bit about the Author...
I grew up in a small town in Southern Ontario and penned my first story when I was ten. Like most writers, I've worked a variety of jobs, but most of my career has centered around students with special needs. This has informed my work greatly.
As a rule, my stories tend to feature complex societies with strong female characters and a lot of action. They are also highly accessible. I've been very pleased so far by the amount of people who don't read fantasy who have enjoyed my books.
It's been a long journey, fraught with failure and difficult times, but I wouldn't trade any of it. Writing is about learning and growing and the ability to look in the mirror. Why? Because that's what the best stories do. (While providing great entertainment.)
For as much as I love to write, however, the most important event in my life happened in 2008 when I met my wife, Bethany, who for reasons beyond my understanding, fell in love with me. We have a couple of spoiled cats and between the two of us, live in a household overflowing with books.
Steve
Links for The Last Angel : Amazon.ca ; Amazon.com
Check out what he's working on, including Book #2, City of Slaves (release date April 6, 2016) at his webpage www.stephenburns.ca
or connect with him on social media
Facebook
Twitter
at January 27, 2016 No comments: Links to this post