Wow! This cover is beautiful! I can't wait to read this!
Don't forget to read the blurb below! 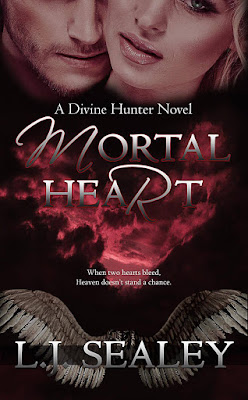 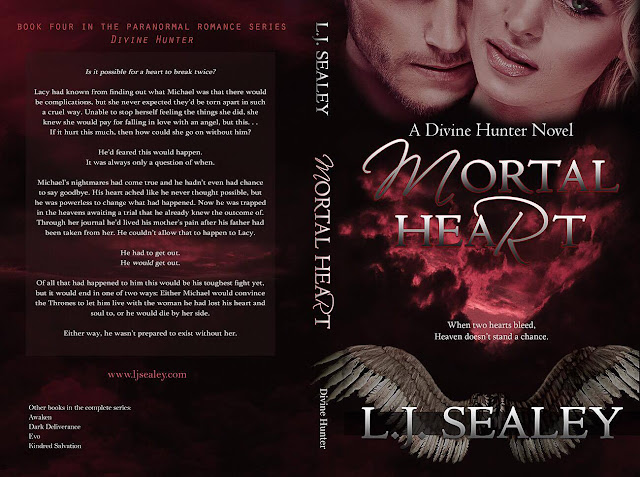 Title: Mortal Heart Series: Divine Hunter #4
Release Date: Winter 2017 tba
BLURB When two hearts bleed, Heaven doesn’t stand a chance. Is it possible for a heart to break twice? Lacy had known from finding out what Michael was that there would be complications, but she never expected they’d be torn apart in such a cruel way. Unable to stop herself feeling the things she did, she knew she would pay for falling in love with an angel, but this. . . If it hurt this much, then how could she go on without him?
He’d feared this would happen. It was always only a question of when. Michael’s nightmares had come true and he hadn’t even had chance to say goodbye. His heart ached like he never thought possible, but he was powerless to change what had happened. Now he was trapped in the heavens awaiting a trial that he already knew the outcome of. Through her journal he’d lived his mother’s pain after his father had been taken from her. He couldn’t allow that to happen to Lacy. He had to get out. He would get out. Of all that had happened to him this would be his toughest fight yet, but it would end in one of two ways: Either Michael would convince the Thrones to let him live with the woman he had lost his heart and soul to, or he would die by her side. Either way, he wasn’t prepared to exist without her.
* Mortal Heart is the fourth and final book in the Divine Hunter series.
And here's a little teaser just for you! 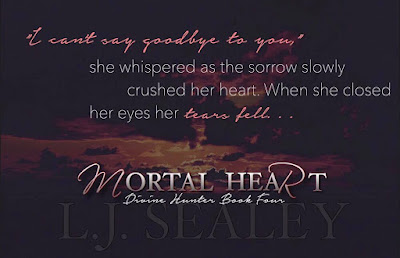 Sarah's Review of My (not so) Perfect Life by Sophie Kinsella 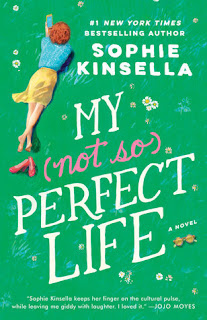 In Sophie Kinsella's newest book, My (not so) Perfect Life, we meet Katie Brenner, living in London, with the perfect life that she posts on Instagram for all to see....well maybe not quite perfect. Instead of a glamorous life she hopes for, she finds herself crammed into a tiny flat with flatmates. Katie's Instagram posts show a lie, only photos of what she wishes her life was like in an attempt to make her father proud. And she hopes that one day her life will match up to her posts. Katie's boss, Demeter, seems to have everything she wants. In Katie's eyes, Demeter has everything, she is smart, creative and has the most perfect home life with a perfect family.
Katie is working from the bottom up, she hopes, in a branding agency. Then, it seems that once Katie starts to finally be getting somewhere, her world comes crashing down. Demeter fires Katie, which causes her to move back home to Somerset with her father and step-mom. She helps them start up a new glamping business on the family farm and all is going great! Katie has even used her knowledge of branding to create the perfect advertising for the farm.
After she begins to feel like herself again, she finds out that Demeter's family has booked a week on the farm. Katie's is faced with a dilemma as whether or not to seek revenge on Demeter. Or to beg for her job back. But as she gets to know Demeter a little bit better she finds out some secrets that shatter her former misconceptions of reality. Maybe they have more in common than previously thought.

First off, I love the way Sophie Kinsella writes and this new character, Katie Brenner, is fantastic. Her character is very well-rounded and relatable. She taps into all of the insecurities that a lot of us have but are unwilling to share. Everyone wants to look perfect on paper, but how many of us actually live up to what we post? And even if ours posts are true, it's really only a half truth that we are sharing with the world. Nobody posts the bad stuff. Everyone just wants to share the good stuff. Therefore, if we don't truly know somebody we may think they have it all, when in reality we are only seeing one tiny snapshot of their lives. There are many layers that are left hidden.

The idea that Katie Brenner isn't solely looking for love, but in actuality is trying to define herself and her identity, while being judged online by today's society is refreshing. The lessons she learns and the person she becomes by the end of the book are good values. She learns that the only real person to be is herself and that person is valuable and unique. The best version of ourselves is the one who we are true to. The one who doesn't have to pretend to be something they are not.

Although there is a romance storyline in the book, it doesn't dominate the story. There are a lot of small plot lines that come together to make one amazing book. There were definitely some laughable moments, but there is a slightly more serious tone to this book than some of Kinsella's other stories.