Sarah's Review of The Death of Mrs. Westaway by Ruth Ware 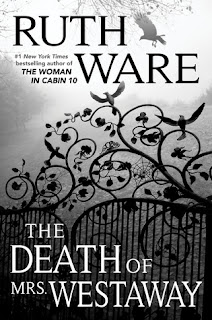 The Death of Mrs. Westaway, by Ruth Ware, centres around a young woman, Harriet Westaway, better known as Hal. Hal works as a tarot reader on a pier in order to pay the bills. Just when Hal feels as though she is in too deep, she receives a mysterious letter stating that she has befallen a large inheritance from a woman known as Mrs. Westaway. Hal knows it's not meant for her as she does not have a grandmother. However, as she is struggling to climb out of debt she has to make a choice. Should she ignore the letter or use her "gifts" to claim the inheritance.
Upon receiving a rather threatening visit from a loan shark, Hal decided to attend the funeral and head to Trepassen House where she meets the rest of the family. After arriving at Trepassen House, the family estate, Hal discovers way more than she intended and realizes that the family has terrible secrets they are hiding. Even though Hal has never heard of this family, she is somehow thrown into the middle of it and all of the secrets.

I thoroughly enjoyed reading this novel. I have yet to be disappointed by anything Ruth Ware has written and The Death of Mrs. Westaway does not disappoint. It's a page turner built on mystery. Even though the first part of the book isn't filled with a ton of suspense, the questions in your head keep you turning the pages. And after meeting the family you just keep asking yourself what's real? What's really going on with them? She slowly unfolds the layers throughout the book until everything just clicks.

I absolutely loved the setting of the story. The big, old, dark house, falling into disarray. The descriptions of her surroundings and of the house itself placed me right into it. It really sets the tone for the overall feel of the story and of what's to befall upon it's guests.

The way that the author uses tarot throughout the story helps to weave things together and shows how symbolism can show up almost anywhere and help guide you to where you need to be. Sometimes we just have to look at something in a different way to see the truth.

If you enjoy a good mystery, that's easy to read, then I'd definitely recommend this one.