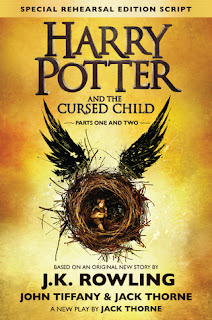 Harry Potter and The Cursed Child is the Eighth Story in the Harry Potter series, and it takes place nineteen years later.

This book is actually a screen play so it isn't written in the normal fashion that we have come to know and love from J.K. Rowling of the Harry Potter series. But that doesn't spoil anything! It was different to see it written out that way, but once you get started you hardly even notice it's a play because the storyline and the movement of the characters dialogue is so engaging. It is a very easy read and as the acts are short it was very easy to read in increments or continuously.

In Harry Potter and The Cursed Child we see Harry as a grown up man. Harry is now working at the Ministry of Magic, is married to Ginny and together they have three school-aged children. Harry Potter never had it easy growing up and is still finding things difficult as an adult.

Harry is still struggling with his past as it doesn't want to stay in the past where it belongs. Harry's youngest son, Albus, is struggling with being a Potter and the legacy that entails, something he didn't want.

Without giving too much away, we find the past and present coming together in a terrifying way. Both father and son have to be honest and put their pride aside to work together. All while realizing that sometimes the darkness come from the most unexpected places.

It was very comforting to begin the story with familiar characters whom still possessed their original personalities. I was very glad that Harry, Ron, Hermione and Ginny had very much of the same characteristics just in a more grown up atmosphere. Even without the descriptions other than stage directions, you could still get a very good sense of their characters and their personalities through their spoken language.

Harry's youngest son, Albus, is whom the story centers upon. And we see him struggle with beginning school at Hogwarts and living up to his father's name. We also see a very unlikely friendship develop right from the beginning. Albus takes very quickly to a boy named Scorpius Malfoy. Yes, Draco Malfoy's son. And despite the relationship between Harry and Draco, the two boys quickly become best friends. And through their trials and series of unfortunate events, we find that they are able to teach their father's something about true friendship and ultimately bring Harry and Draco closer together. Draco's character has grown a lot since we last saw him.

I thoroughly enjoyed how raw the emotions were for all of the characters involved. We see how aging can mature us into something we never saw coming. We also bear witness to Harry's uncertainty as a parent just because of his childhood experience. But it also shows us how what happened to us in the past does not have to pre-determine our future. What happened in the past to Harry, not having a dad and being treated poorly, does not need to be repeated. Harry can shape his own children's lives for the good even though he didn't have anything to compare it to from his childhood. Harry shows us that we should learn from our past and strive for better, while continuously moving forward. The friendship between Albus and Scorpius shows what true friendship is and how strong of a bond it can hold.

The whole idea with the time turner was fantastic. It shows us how, even though we may feel insignificant at times, what we do can and will determine the future and the course of not only our lives, but the lives of those around us. We all play a part in this world and we all make an impact, whether big or small. We are all important in the roles we play in life and we have a significant effect on the lives of those around us, even if we may not feel that way. Remember, you are important.

If you are a huge Harry Potter fan like myself, and you have not yet read this, then I suggest you get your hands on a copy today! You will enjoy it! And even if the style isn't quite the same, at least you will know where the story has gone and what Harry Potter and the gang are up to now. Happy reading!